Where are all the Emus? 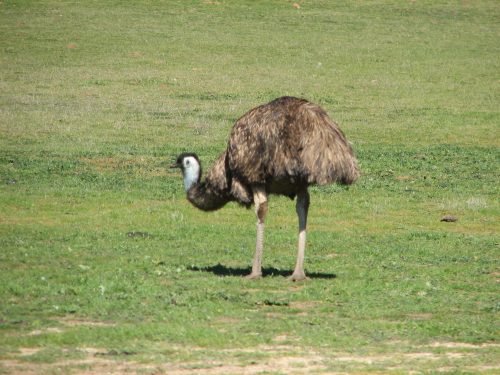 Recently we began another road trip, once again visiting family in Sydney. From home in Murray Bridge, South Australia, it is just over 1300 kilometres or about 14 hours actual travelling time. Whenever we stop, I try to jot down a list of all of the birds I see or hear. When it is my wife’s turn to drive, I am able to concentrate on the birds I see as we are driving along, listing them in my notebook as I see the birds. Sometimes, if I see something unusual, or noteworthy, I will even ask my wife to note this in my notebook when I am driving. She is great that way – and she even points out birds I may have missed.

On all of our trips over to Sydney, I particularly enjoy crossing the Hay Plains between the towns of Balranald and Hay. To most people, this is a dreary, featureless plain covered by saltbush. We find it endlessly fascinating, watching the subtle changes in vegetation as well as the birdlife along the way. On this trip, we saw quite a few birds of prey, something which is not surprising due to the frequent encounters with roadkill. Many kangaroos, rabbits and foxes are killed by the hundreds of trucks traversing this route day and night. We saw plenty of Black Kites, Black-shouldered Kites and Nankeen Kestrels but no Wedge-tailed Eagles which is surprising.

Of particular note, however, was the lack of Emus. Normally we see dozens of this species, sometimes more than a hundred, often in small, loose flocks of 5 to 10 birds. Occasionally, we even see a male Emu followed by a group of up to a dozen immature birds. (The male incubates the eggs and cares for the young for up to 6 months after hatching.)

This time the grand total of Emus was one. In fact, it was the only Emu for the entire 1300km journey.

I cannot account for the absence of Emus on this trip. Perhaps there was no food for them near the road, or they are nesting away from the road. Maybe we will see more on our return trip in three weeks’ time. On the road again part 2

On the afternoon of the first day of our trip to Sydney we travelled from Ouyen in Victoria to Narrandera in NSW.  From Ouyen to Tooleybuc we didn’t see all that many birds, just the occasional Australian Magpie, small groups of White-winged choughs foraging on the roadside, several Willie Wagtails seeking out insects and solitary ravens flying across the road or the adjacent farm paddocks. Usually along here we see various parrot species but on this day we only saw a few Galahs.

If we had stopped at Tooleybuc for a break we might have added quite a few species to my growing list. The River Murray runs through the town and this environment offers much to a wide range of species. The same applies a few minutes later in the afternoon when we cross the Edward River near the township of Kyalite. We also by-pass Balranald and the Murrumbidgee River there.

Between Balranald and Hay we often stop for a break at the Ravensworth Rest Area. I’ve often found a good range of birds at this location. This time, however, we didn’t have the need to stop. Along this stretch of road we saw an Australian Pelican sitting on the bank of a farm dam. I figured that there mush be fish in the dam.

Near the rest area we saw Nankeen Kestrel, Little Eagle and Australian Ravens. A few kilometres back we had seen a small group of Emus. This was in complete contrast with our trip earlier in the year when we saw over 80 Emus on this stretch of road.

Sorry, but I have no photos to show taken during this section of our journey. Perhaps tomorrow?

Birding at 100kph on the Hay Plains My wife and I have just returned from a road trip to Sydney to visit family. Grandchildren can be so persuasive; “We insist you come to stay with us,” said Mr Nearly Five Years Old.

We didn’t get to do much birding because of the wet weather, and the fact that I came down with a severe case of bronchitis while there; as I write this I’m still in the throes of that dreaded lurgy. (“Cough! Cough!”)

While we have flown over to Sydney on several occasions – it’s nearly 1400km each way – we prefer to drive because we enjoy the passing scenery, flora and fauna and the birds, of course. Yes, it’s tiring travelling non-stop for two full days, but we take it in turns to drive. When I’m at the wheel my wife records the birds I see and can identify along the road. Identification can be challenging when hurtling along at 100kph on a busy highway. And when it’s my wife’s turn to drive I can give a little more attention to what is flying around, or sitting on the roadside – or even on the road itself.

I usually try to arrange to be the passenger when we are crossing the Hay Plains between the towns of Balranald and Hay in far western New South Wales. This long stretch of road has huge expanses of grassland and saltbush with only the occasional tree until the last 20km just east of Balranald. Usually the birding along the 130km road is excellent with plenty of birds of prey. On this trip however, I saw few birds other than Emus.

Usually I count on seeing perhaps up to ten or a dozen Emus along this road, but on this occasion I estimate there were between 50 and 80. I didn’t count them but one loose flock alone numbered around 20. as for the rest there were numerous groups of two, three or four. It was certainly the most I can ever remember seeing on this stretch of road, one we’ve travelled on many occasions when travelling to Sydney to visit family. (Now that we have grandchildren there as an added incentive, we are travelling over there up to three times annually.)

Baby Emus on the Hay Plains

In my posting yesterday here I mentioned that we recently went on a road trip to Sydney to help out our family living there. At a distance of  just over 1300km it is a significant journey to undertake, fully two days of travelling. We’ve done this journey many times over the last 15 years, and now we have the incentive of visiting our only grandchildren in the process.

Because the journey takes up most of the two days there are few opportunities for birding along the way – except from the car while speeding along at over 100kph. It always delights me when I see something special, like the Banded Lapwings yesterday. I usually make a list of the species seen along the way.

One bird species I always look for in the early stages of the trip is the Emu. The western plains of NSW are good habitat for this species and we usually see one or two small flocks. On this occasion we saw two separate groups, the second one being a male adult bird accompanied by about 4 or 5 half grown chicks, a little bigger than those shown in the photo above. This photo was taken some time ago in Monarto Zoo which is close to our home, being only about a 15 minute drive away.