Archive for the 'Waterbirds' Category

After my visit to my son and family in Sydney in May of last year, I travelled south and followed the south coast of New South Wales and Victoria on my way home. As you might have gathered from my opening sentence, I am over a year behind in sharing my bird and travel photos here.

On my way south I took a detour into the Royal National Park, Australia’s first declared national park and the second oldest national park in the world. Over the many trips we have made to Sydney we have visited this park on a number of occasions. Because of its size and many and various attractions, visitors could spend many days exploring its beauties. I am sure that nearby residents have spent a lifetime enjoying its wild beauty.

After enjoying a cuppa for morning tea I went exploring along Lady Carrington Drive. I distinctly remember my very first walk along this walking/cycle track many years ago. I was told that this was a reliable site to see Lyrebirds. Indeed, I did see a Lyrebird on the occasion, casually following me along the track. That was my very first ever sighting of the species. I was so shocked that I forgot to take a photo. On this most recent visit, I was disappointed not to have that early experience repeated.

The picnic areas and walking track in this part of the park are adjacent to the Hacking River. While I was able to get a reasonable list of birds seen and heard in the area, not many of the individuals present were generous enough to come out and pose for my camera. That is why I also like to take shots of our native plants as well. They tend not to fly away while I focus my camera.

On my visit to the Australian Botanic Gardens in Mount Annan, SW Sydney last week I was surprised by the behaviour of the Purple Swamphen shown in the photo above. It didn’t seem to mind me walking past only a few metres away, nor was it concerned by the lady sitting at a picnic table about ten metres away.

I am not used to seeing Swamphens sitting down in this manner except when they are sitting to hatch their eggs. It almost looked as if it was in the process of actually hatching its eggs. Or was it just having a little rest? Normally, I am used to seeing Purple Swamphens strutting along elegantly on their long legs, rarely hurried and quite at ease with the world.

There are two major flaws in my idea that it was preparing a nest, or sitting on eggs.
1. Swamphens usually make a nest in a stand of reeds, treading on them to make a flat platform on which they make a nest.
2. When I went past this spot some twenty minutes later, the bird had moved on.

I guess it really was just enjoying a quiet rest in a comfortable spot. 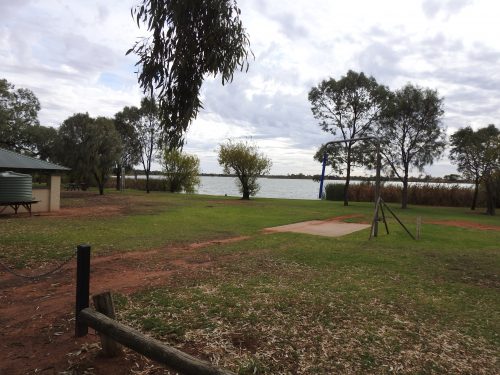 In recent days I have been on the road again. This is my first major trip since October of 2018. I was on my way to Sydney to stay with family but I decided to take a completely different route this time. Normally I travel almost due east, travelling through Pinneroo, Ouyen, Balranald, Hay, Wagga Wagga and Goulburn. On this trip, I headed north from my home in Murray Bridge to Blanchetown where I crossed the Murray River.

I headed on east past Waikerie, Berri, Renmark and on towards Mildura in north-west Victoria. By the time I reached the small community of Lake Cullulleraine, it was time for a break and for lunch. Whenever I am travelling, I usually look for a good birding spot to add to my list of birds seen. This lake and the area nearby have always proved to be a satisfactory birding spot. In fact, many years ago my wife and I spent a lovely week in our old caravan here.

The lake is filled from the nearby Murray River and the whole river-lake complex is a rewarding birding area. Added to that is the farming area surrounding the lake which adds a different birding environment. Where the land is not used for agriculture, the remnant mallee scrublands provide birding experiences of yet another type. 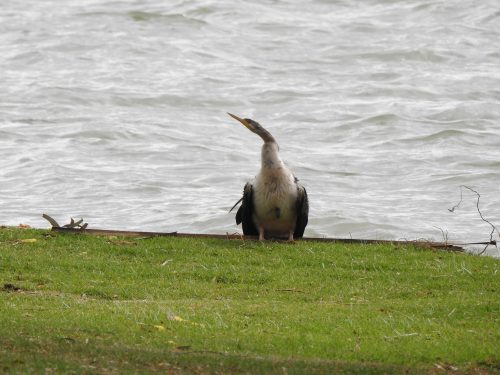 As soon as I pulled up in the car park I saw a Darter drying its wings though when I took the photo above it had closed its wings for a moment. As I was having my lunch I listed all of the other birds observed around the picnic area or on the nearby lake. The following is a list of the species seen:

It is not a long list but it was good to get started on listing the birds seen on my trip through South Australia, New South Wales and Victoria over the next few weeks. I will write about the birds I see on my journeys in the coming posts on this site. 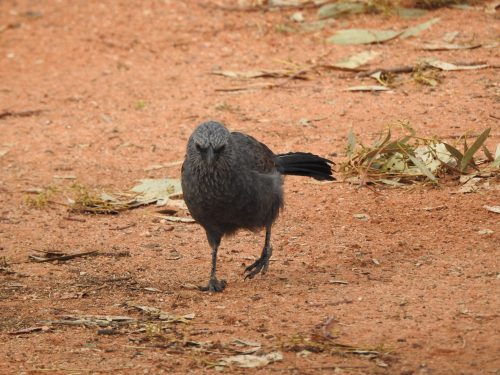 As I prepared to leave, a small family of Apostlebirds came meandering around my car enabling me to get some good photos. They were constantly calling to each other while they scratched at the ground seeking out a few items to eat for their lunch. 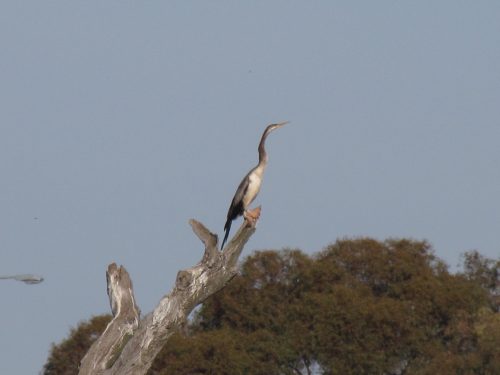 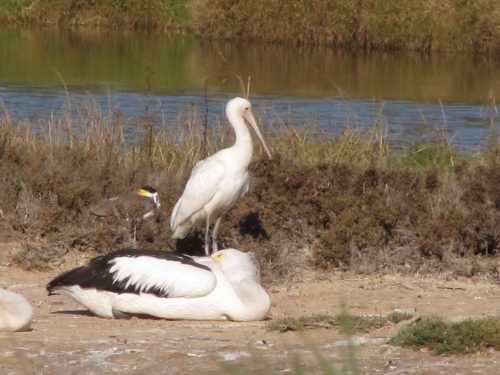 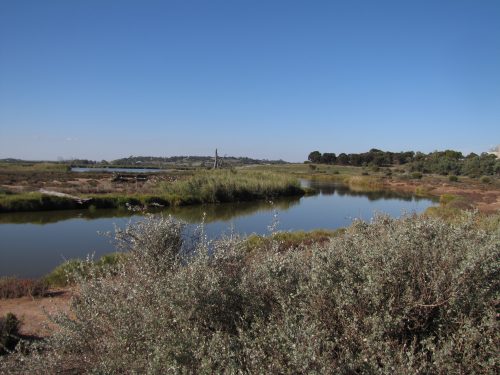 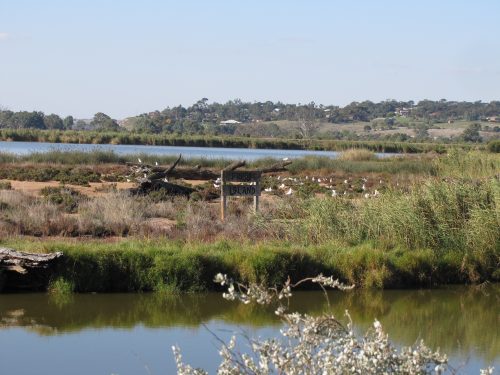 Birding along the River Murray 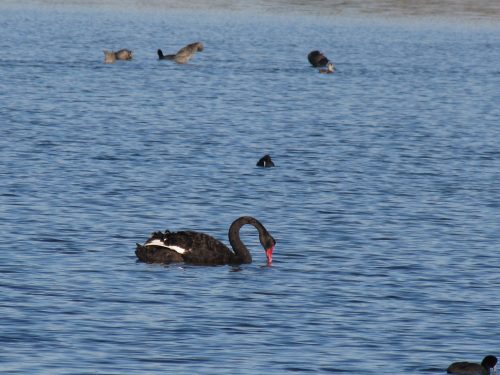 A few weeks ago I participated in the Global Big Day. This was a special birding day held all over the world. Participants went out birding in their local patch. This could be your own garden, a nearby park, or a little further away. I decided to visit six of my favourite local birding sites, starting with my own garden. It was an interesting and relaxing afternoon. I visited several spots I had not been to in quite a while. Naturally, my camera came with me.

One of my birding sites was Sturt Reserve here in Murray Bridge, South Australia. This reserve, about five kilometres from my home, incorporates large grassed picnic areas along the River Murray. At this point, the river is quite wide and affords good views of quite a range of water birds, including ducks, coots, swamphens, cormorants, darters, pelicans and grebes.

The picnic areas have some old growth gum trees which are favoured spots for a range of parrots, cockatoos, honeyeaters and magpies. To the south of the reserve, there are several shallow lagoons. These generally fill up due to run-off from land nearby during rain. They would also be filled if the river ever flooded. There may even be a way for water to enter these lagoons directly from the river, but I am not aware if this actually happens.

These lagoons also attract a range of water birds. On my special day out birding, I saw Black Swans (see photo above).

As well as the swans I also recorded the following species:

Please note that if you click on any of the above list of birds, it will take you to more articles and photos of those species. 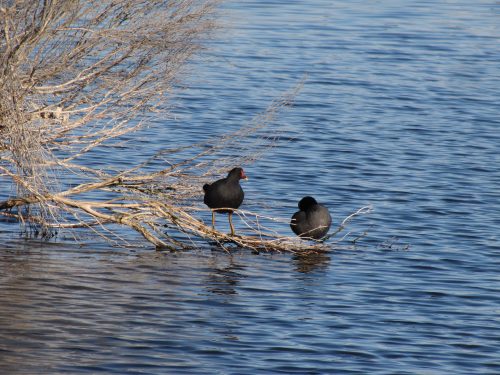 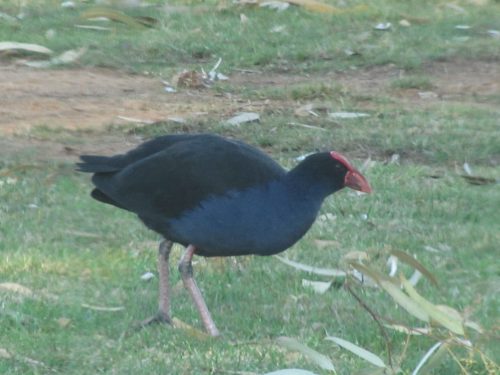 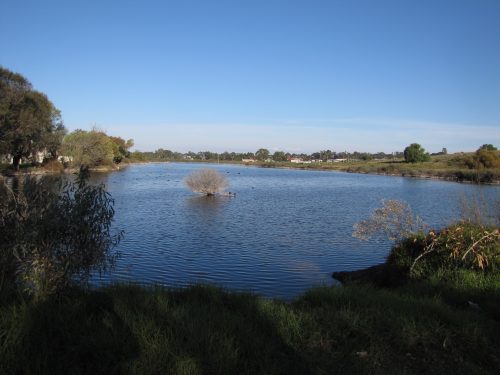 Part of the lagoon south of Sturt Reserve, Murray Bridge

You are currently browsing the archives for the Waterbirds category.