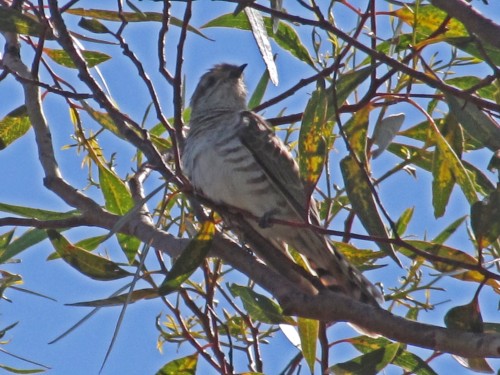 Spring is on the way – and so are the cuckoos

Earlier this week I was sitting on our back veranda doing some reading – and enjoying the lovely sunshine. After many weeks of gloomy, drizzling weather it was wonderful to soak up some warmth.

My reading was suddenly interrupted by the distinctive call of a Horsfield’s Bronze-cuckoo. I looked up and saw this bird perched near the top of a nearby mallee tree. (The branches are dead because they have been ring-barked and subsequently killed by two Galahs chewing the bark.)

I raced inside for the camera and managed a few reasonable photos before it flew off, probably looking for an unsuspecting host to care for its eggs and young. Like most cuckoos in Australia (and elsewhere), this species is parasitic, meaning that they lay their eggs in the nests of other species. Around our garden this probably means the nest of a thornbill.

The unsuspecting host pair hatch the cuckoo’s egg and then feed the young cuckoo. The young cuckoo will even tip the other young birds out of the nest – and thus get all of the food.

Since hearing this bird I’ve heard others in the district, so the spring/summer breeding season is definitely on the way.