Arriving in Bordertown meant that we were on the home straight after our three week holiday in Sydney, Canberra and Melbourne and many points in between. We stopped in a tree lined park just off the main highway through town. There is a small lake in the park, as well as some very unusual public toilets. They are the green buildings in the background in the photo above. These building were originally built as jail cells during the Victorian gold rush era in the 1850s and still have the original bars, locks and heavy doors.

As we had a cuppa the air was constantly filled with the screeching of Rainbow and Purple-crowned Lorikeets in flocks of up to 20 or 30. Much quieter were the Red-rumped Parrots in the trees and coming down to drink from the lake. The many Noisy Miners added to the general cacophony and the White-plumed Honeyeaters in the nearby trees could hardly be heard. None of this disturbed the family of Pacific Black Ducks sleeping in the grass on the bank of the lake.

After our cuppa we headed off on the last leg of our 3500km journey through the eastern states. We had covered a lot of territory and I’d seen some wonderful birds.

I’m just back from an early morning walk. It was about 15C, crisp fresh, no breeze and cloudless. A perfect morning for a walk.

As I was going along I was aware of several dozen Little Ravens calling nearby. I’ve been aware of many ravens calling near our home over the last week or so. It’s something they tend to do several times a year. They will gather in large numbers, often 30 – 50 or more and commence calling raucously for ten or twenty minutes or more. After a protracted chorus of their calls, especially near the house, one can feel a little annoyed; it can be a penetrating call up close.

I also observed about a dozen Crested Pigeons sitting on the power lines or feeding on the ground. Several of them were giving their elaborate bowing, bobbing and tail fanning display to prospective mates. This species seems to be always breeding around here. Probably why there’s a growing number of them.

We occasionally have lorikeets land to feed in the trees in our garden but more often they just fly over, very rapidly and very noisily. This morning a flock of 10 Purple-crowned Lorikeets went screaming overhead as I walked along, did a 360 turn wheeling around to check me out (or maybe the mallee tree on the side of the road) before streaking off to find another tree in blossom. It’s like having a miniature squadron of fighter jets fly over at close range. The photo below shows a related species, the equally noisy Musk Lorikeet which we also get here from time to time.

While staying with my daughter in Clare in the mid-north of South Australia last weekend I was aware of the large numbers of Musk Lorikeets in and near her garden. Just over the fence in a neighbour’s back yard is a tall Eucalyptus citriodora (Lemon Scented Gum). It is about 10 metres high and covered in flowers. These are clusters of creamy stamens several centimetres long. And don’t the lorikeets love these flowers!

Lorikeets in the garden
While I was doing some gardening in the back yard on Monday morning I stopped a number of times to observe these raucous creatures. As they are feeding there is the constant contact calls, a relatively quiet screech – if that is not a contradiction in terms. They scramble all over and through the foliage seeking the next flower for its nectar. After a few minutes of this two or three of them would suddenly take off towards another tree, perhaps a few houses away or in the next street. Sometimes they would head arrow-like towards the park a block away, or towards the trees lining Lake Inchquin or the golf course next to it. As they fly they frequently emit high pitched screeches. You would have to be totally deaf not to be aware of these noisy birds zooming overhead.

Photo opportunity
As I watched one bird in particular I was aware that it was feeding on the outer foliage closest to where I was working. Of course the camera was inside. Would this flighty bird stay long enough for me to take a photo? I raced inside, grabbed the camera and crept as unobtrusively as I could back to my spot. The lorikeet in question must have been very hungry; he was still there. Over the next five minutes I managed to take some photographs, mainly of the foliage! Eventually I did manage a reasonable shot of the bird on the outside of the leaves and in full sun. The brilliant colours show up quite well, especially the bright grass green of the back and sides and the brilliant red forehead.

Lorikeets in South Australia
Lorikeets are widespread throughout southern South Australia. There in the Clare Valley the Musk Lorikeet seems to be the dominant species, but I have also recorded Rainbow Lorikeets from time to time. The Purple Crowned Lorikeet may also be found in this area. In Murray Bridge where I live, however, the latter species is the most common, followed by the Rainbow Lorikeet. The Musk Lorikeet is not observed nearly as much in our area.

UPDATE: for related articles and more photos click on these links:

This article was updated on October 3rd 2015. 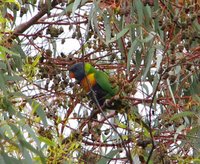