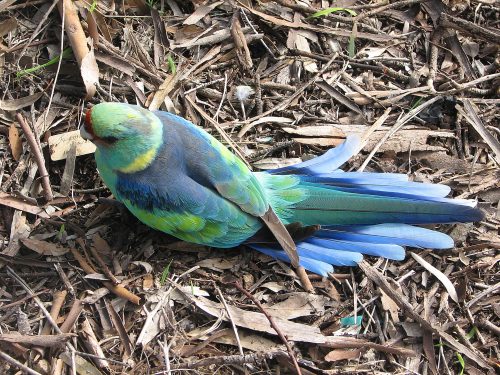 Over recent years we have had a family of Australian Ringneck parrots move into our garden. Before that, they were only occasional visitors, but now we see – or hear – them every day. They can be raucous at times. I now consider them to be a resident breeding species in our garden. In fact, only last week I witnessed two of them mating, so we could have even more around in the next few months. They have been constantly investigating a large hollow in one of our mallee trees. The birds we have here are the sub-species Mallee Ringnecks.

At first, we only had two birds, but after breeding, there were more, and now we often count up to about eight birds in our garden, or in the nearby mallee scrub. They chatter away noisily in the nearby trees, often disturbing the peacefulness of our edge of town block of land. We don’t really mind because we love having them around. That is – until they attack our ripening pears, chewing around the stems of each piece of fruit. Each summer I have to drape netting over the trees to minimise the damage.

Last week I was going out the sliding door on to our back veranda. I was heading out to sit in the weak winter sun to do some reading. One of the parrots flew from the nearby tree towards the house just as I came out of the door. It was flying directly towards me, wings and tail spread out fan-like as it came to a stop, landing on the edge of the roof guttering. As the feathers spread out, I glimpsed the beautiful colours of this lovely bird. Sadly, I didn’t have my camera – it happened far too quickly, anyway.

The photo at the top of this post shows the colourful feathers of one of our birds which accidentally flew into my office window last year. It sat on the ground quite stunned for a few minutes before flying off again. The photo below shows another shot of the same bird. 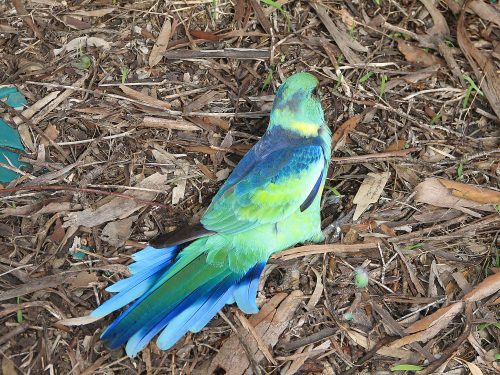 Mallee Ringnecks on a hot day During the hot weather we have experienced so far this summer here in South Australia I have had many opportunities to take photos of the constant parade of birds visiting our bird baths. We have positioned the water containers where we can see the birds from our sun room, a room we use often so we can enjoy the birds in our garden.

The Mallee Ringnecks shown in today’s set of photos are resident birds in our garden. This means that we see them every day. On several occasions in recent times they have raised a brood of young ones. We love seeing their colourful feathers as they fly around the garden and especially when they come to drink and bathe. At those times we can really get to appreciate their colours up close.

On the other hand, we have a love-hate relationship with these birds. We hate it when they get into our fruit trees, nibbling at the almost ripened fruit before we have a chance to rescue the fruits of our labours. This year, because of a bad back, I have not been able to cover the trees with netting. Consequently the birds – and possibly the resident possums as well – have taken some of our fruit. We were especially looking forward to a large crop of nectarines. (Those we were able to rescue were delicious.) I must get to the pears before the birds get to them as well. Earlier this year my wife and I had a day visit to the Lane Cove National Park. We were visiting our family for a few weeks and on this occasion we were free from grandparent duties.

Lane Cove National Park near Chatswood north of the Sydney CBD and is only about 15 minutes drive from my son’s home, so visiting is quite convenient. We went on a weekday, so there were only a few people around. Lunch time walkers, runners and cyclists made up the majority of visitors to the park.

As we were about to eat our lunch I noticed an Eastern Rosella fly in to a nearby tree. I steadily walked to within camera range and managed several good photos. Every time I see this species I marvel at the wonderful combination of colours.

Eastern Rosellas are quite common in the eastern parts of Australia. They are also present in the south east of South Australia and were introduced to the Adelaide region. We occasionally see one in our garden at Murray Bridge. It keeps company with the local Mallee Ringneck parrots. I’m not sure if this is a cage escapee or a case of their range steadily expanding.

Whatever the reason, we always enjoy seeing “our” rosella. Get out of my patch We normally have a few Mallee Ringneck parrots hanging around somewhere on our 5 acre property. In the last few years we have also had one Eastern Rosella keeping them company. We don’t see it every day but frequently enough to keep us happy – after all, it is a handsome looking bird.

This particular parrot has taken a liking to the flowers of several of our Eremophila youngii bushes – you can see the flowers in today’s photos. All the bushes have a pink carpet of flowers surrounding their trunks.

Earlier this week we were enjoying watching the rosella eating while we had our breakfast. A sudden flurry of flapping wings and snapping beaks and the parrot flew off at full speed – its tail closely pursued by an very aggressive Red Wattlebird which in turn was followed by a New Holland Honeyeater.

Both of these honeyeater species spend large proportions of their day also feeding on the flowers, so they seemed to be objecting to this interloper elbowing in on their patch. In reality, while both honeyeater species  feed on this bush, neither tolerates the other for more than a few seconds. It is an all out territorial war.

And I forgot to mention that both honeyeater species are in breeding mode, so their tolerance level is at its lowest at this time of the year.