It was my birthday last week. I had a really great day. The weather was perfect at about 25 degrees, a bright cloudless sky and a gentle cooling breeze.

My wife suggested that we go out for lunch. We tried a recently opened restaurant called Pomberuk here in Murray Bridge. It is a part of the Aboriginal Cultural Centre. Downstairs there is a museum telling the story of the local Aboriginal people. There are also many paintings featuring local Aboriginal artists. On one side of the gallery and museum there is a viewing window where you can see chocolates being made in The Cottage Box factory.

Upstairs there is a gift shop and the restaurant. You may choose to eat indoors in the main restaurant or out on the balcony. The restaurant overlooks the River Murray, less than 40 metres away. The birdwatching is great from this vantage point, although some birds may be frightened away a little by the noise coming from both bridges.

The restaurant is situated between two of the the three bridges here in Murray Bridge. Near the CBD there is a road bridge and a separate rail bridge. Several kilometres downstream is the newer Swanport Bridge which serves the road bypass on the Adelaide to Melbourne highway. I was quite surprised how little noise coming from the bridges actually reaches one as you sit on the balcony of the restaurant. The food was delicious. And reasonably priced too. 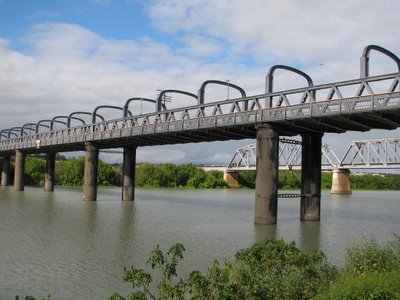 This photograph show two of the three bridges at Murray Bridge.
The road bridge is in the foreground with the rail bridge is in the background.
Pomberuk is on the right in between these two bridges.

After lunch we drove a little distance downstream and found a shady tree to park under. we sat there for nearly half an hour watching the river flow past. Very relaxing. 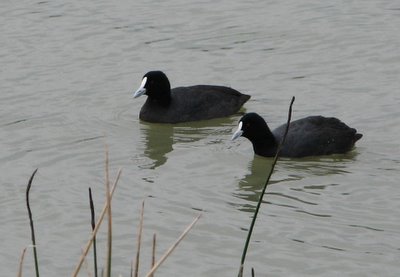 Eurasian Coot are a common bird on the Murray River at Murray Bridge.

Here is a list of the birds I saw during that time: 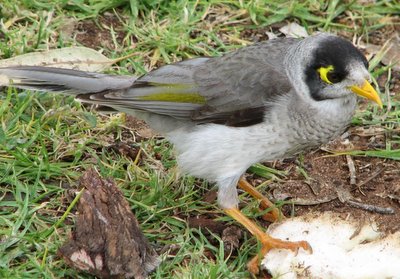 Noisy Miners belong to the honeyeater family of birds, but this one has taken a liking to some bread left by someone having a picnic.
Next: Morning Walk » « Prev: Galahs on Guard