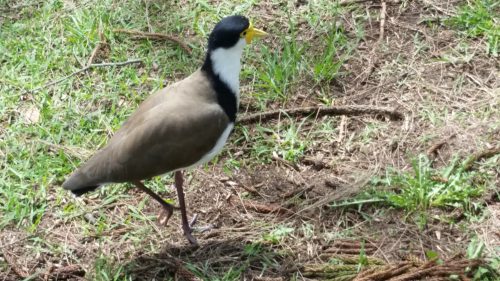 I recently went with my son and grandson to Little Athletics at the Rotary Athletics Field, Lane Cove, Sydney. On many occasions when I am in Sydney visiting my family, I have enjoyed seeing my grandson compete in the various events. He is quite talented and has even reached competing at the state level.

During the morning’s events, I made a note of all the bird species seen or heard. I have done this on most occasions on our visits to this athletics ground. On this occasion, all of the events had finished and the equipment was being packed away. My grandson and I bought some food for lunch from the barbecue which is provided every week and we were sitting on a nearby picnic ground adjacent the track. A Masked Lapwing flew in and landed only metres from where we sat. People were heading to their cars and it was quite unconcerned by their presence.

The bird actually came up to within a metre of where I was sitting. I am not sure if it wanted me to share some of my sausage or bun or was expecting some worms to fall out of my lunch. It hung around until I was finished eating and I managed to get my phone out of my pocket and take the photo above. No zoom needed – it was very close.

A little further off near the barbecue area, someone dropped a sausage on the footpath. It was only there for a few seconds until two Laughing Kookaburras swooped down from the nearby trees to grab the sausage. My grandson and I were amused by what happened next. The kookaburra picked up the sausage and proceeded to bang it on the ground, either to “kill” it or to break it up into smaller, more manageable chunks.

This incident reminds me of another occasion on a visit to the nearby Lane Cove National Park where we experienced some lunch snatching kookaburras. 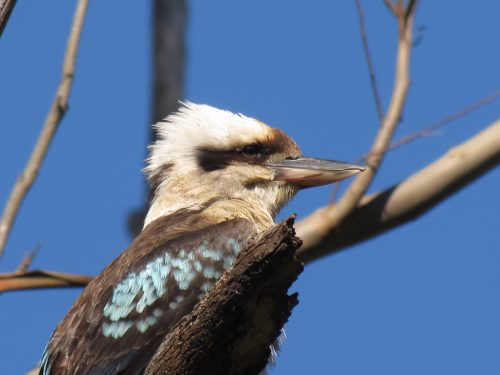 
One Response to “A very cheeky lapwing”