Next: Collared Sparrowhawk » « Prev: Galahs in the morning sun

Yesterday’s weather forecast promised northerly winds with a maximum temperature of 37 degrees Celsius. I decided to go for an hour long walk early in the morning to avoid the worst of the heat.

As far as birds were concerned I didn’t see anything out of the ordinary. Numbers seemed to be down by about 50% but this only indicates that they were not calling as much. On my local walks more than half of my bird identifications are by call alone.

I did get a good photograph of two – presumably a pair – of galahs sitting high in the dead branches of a mallee tree near the road. 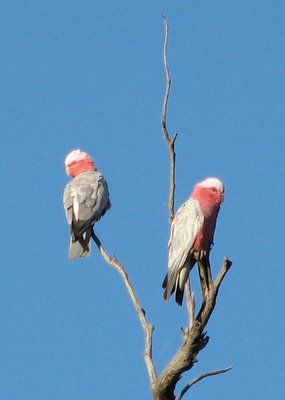 I was intrigued by the rising sun lighting up the ruins of an old farmhouse less than a kilometre from our front gate. I am very pleased with this shot because it also shows up the thick mallee scrub behind it. During summer months I rarely venture up in that area for walks or bird watching because the few tracks through the area are so overgrown with weeds and grasses one cannot have warning of snakes. Little did I know that a few hours later this area would become an inferno. 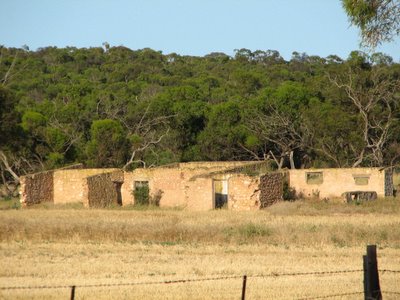 Mid afternoon a bushfire broke out just behind this old farmhouse. As the afternoon passed the fire grew worse and by four o’clock, with the temperature around 42 degrees, we and our neighbours decided to pack some essential items in our cars and have them ready for a retreat. If the forecast cool change came early or the wind suddenly changed direction, our house was in a direct line of the fire.

We watched anxiosly for the next eight hours as about thirty fire crews, many from distant towns, battled the blaze. A helicopter constantly dropped water and three fire fighting fixed wing planes dropped fire retardant on the blaze. At midnight another twelve relief fire crews and their trucks came to the scene; some had travelled from as far as Pinnaroo, nearly two hours travel away. 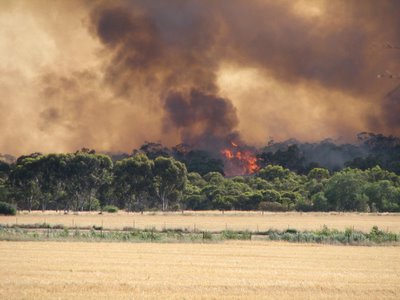 After a restless few hours sleep we were awoken at 4:30am by the smell of smoke; the wind had finally changed. By then there were only a few spot fires visible from our window. This morning the cool change has been welcome relief. Several fire crews are still watching the area. Wisps of smoke can still be seen from a few hot spots. Mallee stumps and roots can smoulder for weeks if left unattended. 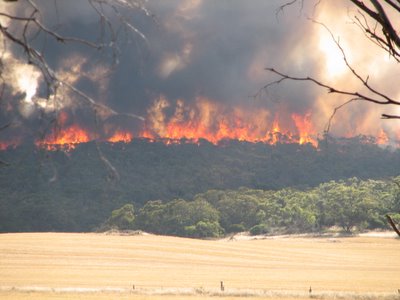 The main threat is now over, but the forecast for more hot weather over the next two days will keep us on edge. This, however, has been our only fire threat in over twenty years of living in this house.

Next: Collared Sparrowhawk » « Prev: Galahs in the morning sun


One Response to “Bushfire”