Next: Galahs in the morning sun » « Prev: Lorikeets, Parrots and Wattlebirds

On my morning walks in the hills to the west of Murray Bridge in South Australia I often come across family groups of White Winged Choughs (pronounced “chuffs”). These amusing birds are reasonably common throughout the mallee districts of our state. Their white wings are quite conspicuous when they are in flight. 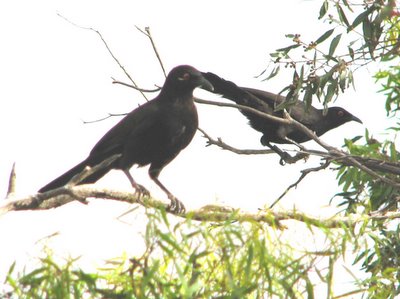 White Winged Choughs are usually found in family groups of about four or five through to as many as fifteen and sometimes more. They are often seen foraging for food on the ground. We often watch them from our sun room or in our garden as they strut around with an important looking air. It amuses us that they seem to prefer walking to flying. When startled, they fly up to the nearest tree, their rasping alarm calls carrying far. At other times their calls can be mournful whistles.

White Winged Choughs make a large bowl shaped mud nest. Below is a photograph I took this morning in an area where I have often observed several groups of choughs. This particular nest did not seem to be in use at present. It looks quite new and was probably used in the spring time this year (Sept-Nov). Elsewhere I have observed the whole family group building the nest and later co-operatively feeding the young in the nest. Approximate size of the nest is 20-25cm high and 20-25cm wide. 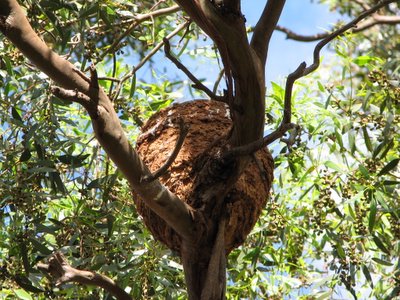 Next: Galahs in the morning sun » « Prev: Lorikeets, Parrots and Wattlebirds