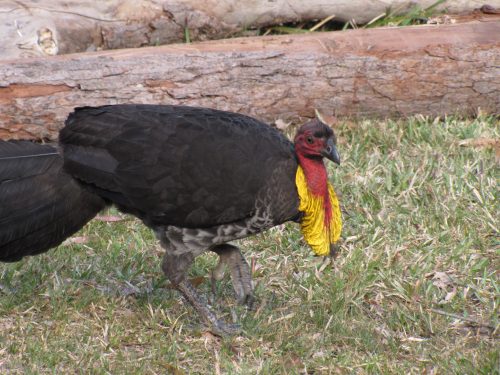 Over recent weeks we have been staying with family in Sydney. During our four week stay, we have observed Australian Brush Turkeys on many occasions. One actually walked past their house on the footpath in Artarmon. Whenever we have visited various parks and gardens around this area, we have seen one or more turkeys. It is something we do not get to see where we live in South Australia, so it is something of a treat and special to us.

Last weekend I was driving my family to Little Athletics. I don’t normally get to see my grandson compete, so it was a special occasion. Just as we were about to get to the athletics track, I had to slow down for a turkey in the middle of the street. It was casually walking across the road, oblivious to the traffic which was thankfully quite light – our car was the only one at that point.

Whatever the reason, it made me laugh to see the turkey ducking and weaving to get away from the miners’ pecks on its back. I didn’t get a photo because I was driving, and my camera was not within easy reach, anyway. I have included a photo above of a turkey taken in the nearby Lane Cove National Park a few days earlier. On that occasion, the turkey in the photo was harassing us as it attempted to scrounge some food from our picnic table. I’ll write about that in another post soon. The photo of a Noisy Miner below was taken some time ago in the Adelaide Botanic Gardens. 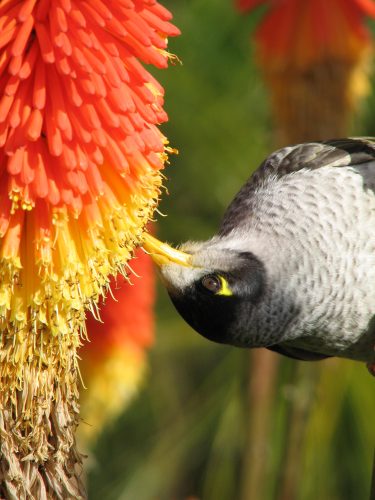 For the rest of the afternoon, I was more interested in watching my grandson competing than in the local birdlife. There were plenty more Noisy Miners and Rainbow Lorikeets, several Australian Black-backed Magpies, a few Australian Ravens, one Magpie Lark and several Laughing Kookaburras. Three Crested Pigeons tried several times to settle on the grass to feed, only to be disturbed by the children running around the track, or moving across the oval to their next event. There was no sign of the Channel-billed Cuckoo I observed at the same location a week earlier.

I would love to read about any funny incidents you have seen involving birds, I would be very happy for you to leave comments.