Next: Going cuckoo » « Prev: Hi there honey – encounters with honeyeaters

How sweet it is

I have been trying for several days to capture a New Holland Honeyeater doing their usual gymnastic tricks while feeding. Just before lunch today I managed to get one upside down feeding from a flower in an Eremophila youngii. Eremophilas are commonly called Emu Bushes. 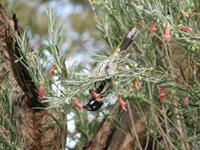 No – I haven’t inserted the photograph upside down! It’s the bird that is upside down. The curved beaks of the Ausralian honeyeaters are ideally suited to feeding from many of the Australian plants like the Eremophilas, Correas and Prostantheras with their tube shaped flowers.

Of course the New Holland Honeyeaters don’t have it all to themselves. The Red Wattlebirds also insist on their fair share of the spoils. The above photo shows a Red Wattlebird busy in another eremophila nearby. A few seconds after this photo was taken a New Holland Honeyeater tried to chase the wattlebird away, only to have the tables turned and become the one being chased. 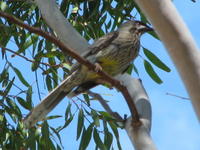 Wattlebirds can be bossy creatures, especially if another bird tries to muscle in on their patch of food. The above photo shows a rare moment in the life of a Red Wattlebird – sitting peacefully on a branch of a Eucalyptus citriodora or Lemon Scented Gum. On closer inspection of the photo I just realised that this individual is keeping the above eremophila plant under surveillance. 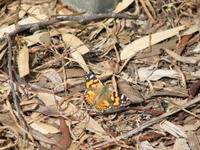 My new interest in butterflies continues unabated. I didn’t realise how many butterflies we have around our garden until I started quietly stalking them, camera poised. Today I managed several reasonable shots of the Vanessa kershawi or the Australian Painted Lady butterfly. We have at least two other species common in our garden, but I have yet to get a good shot of them. I know of at least two other species that have visited in the past but I haven’t seen them for several years.

Here’s another challenge I could set myself. Try to get some photos of the dragonflies we have around here! Then I could move on to other insects, such as ants and beetles. And what about caterpillars? Oh, and then we have quite a selection of reptiles, including Brown Snakes (which are very dangerous so I don’t want to get too close; the zoom lens will help there). 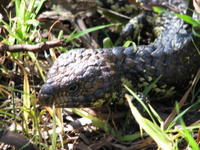 As for lizards, they are on the move already. I have included a photo taken yesterday of a Stumpy-Tailed Lizard (also called a Shingleback). We have quite a few individuals on our little estate. I haven’t seen any young Stumpy-Tails for a few months. We did see several in the autumn months. We enjoy seeing them come to one of the bird baths for a drink. The Aussie expression “flat out like a lizard drinking” is so apt. To illustrate how common this species is in the Murray Bridge area, our local poetry competition is called “The Stumpies”. I’ll try to get a link to details of this award.

We also have a range of geckoes and skinks on our land, all of them quite beautifully marked and would make wonderful photographs to include in this journal. Then we have the following mammals present (or occasional visitors): Western Grey Kangaroo, Common Brushtail Possum, Short-Beaked Echidna, Brown Hare*, European Rabbit*, House Mouse*, Black Rat*, Red Fox* and feral cat*(*introduced). I am sure we probably also have four or five species of bats but I’ve only indentified the Western Broad-Nosed Bat.

Mmmm… methinks I’ve opened a can of worms here!

Worms???
How photogenic are worms??

PS. I’m so pleased I do not have to buy film for this new camera.

Next: Going cuckoo » « Prev: Hi there honey – encounters with honeyeaters