Next: Lunch snatching Kookaburra » « Prev: That’s not what I expected 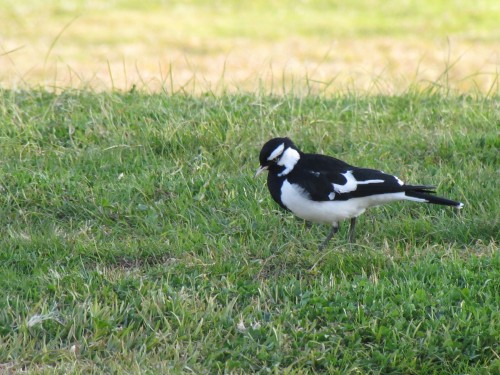 It is autumn here in southern Australia and this is the favourite season of ours. We generally have very little wind, a few cloudy days but the majority of days are chilly in the morning with occasional frosts, followed by a sunny day. On lovely days my wife and I love to sit out on our back veranda to eat our lunch. This part of our house is overlooking our garden and the nearby mallee trees. It can be a perfect spot to do some birding without disturbing the birds going about their normal daily activities.

In recent days I have taken to also wearing my binoculars while I eat. I must say that I do more birding than eating in this way. The food eventually gets consumed but the interruptions are frequent. Today was a particularly good day with an interesting range of birds. Possibly the most common species in our garden would have to be the House Sparrows and the Common Starling, two introduced species here in Australia.

We also have many Weebills and Yellow-rumped Thornbills. About a dozen of these beautiful thornbills few past only a few metres from where we sat, calling to each other as they flew. The Weebills are harder to see because they tend to forage in the tree-tops and are sometimes hard to pick up as they move in the foliage. Their call is hard to miss, however. It is a similar situation with both the Striated Pardalotes and the Spotted Pardalotes: hard to see but easy to hear. 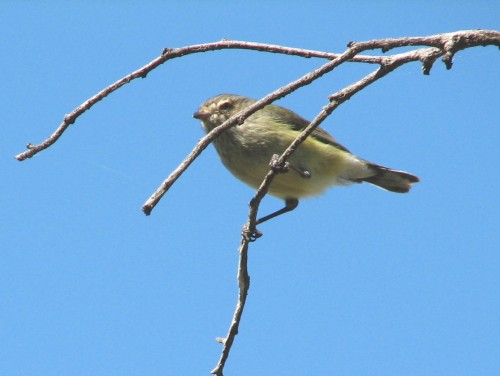 Talking about calls, one of the more strident bird calls we experience here is the Australian Magpie-lark, shown in the photos at the top of this post. We had two in the garden today but they hardly made a sound. In fact, the female sat in a nearby tall mallee tree preening itself for most of the time we were sitting there. Not a call to be heard and I nearly missed listing her for my database. Also quite inconspicuous today were the resident Australian White-backed Magpies, heard just over the neighbour’s fence but not actually seen during our lunchtime break.

At one stage I commented to my wife that I hadn’t seen the White-browed Babblers in a while. The local family must have heard my comment because a group of about eight flew past a few minutes later, their mewing calls unmistakeable. In the distance, I could hear several Little Ravens calling, and one of them came quite close, investigating the trunk of a nearby tree and looking under the bark for a few beetles or spiders for lunch. 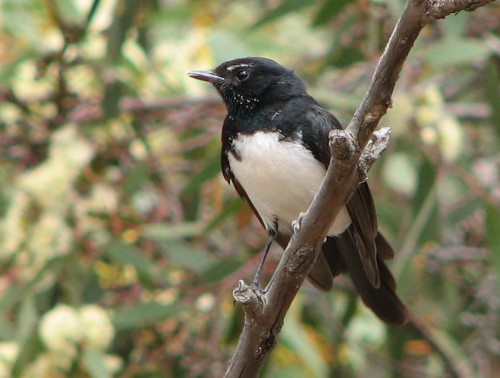 One of the notable birds missing today was the resident Willie Wagtails. I didn’t see either of them, nor did I hear them. That can happen sometimes and I guess that they were feeding some distance away from the house – perhaps on the other side of the building. Or they might have been out in the paddock because we live on a five-acre block. I was also surprised by the lack of honeyeaters. I saw several White-plumed Honeyeaters and a few Red Wattlebirds, but the usually noisy and bossy New Holland Honeyeaters were nowhere to be seen – or heard. Strange. 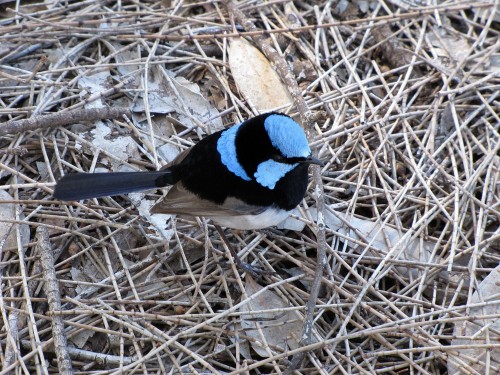 Over the last five years, we have been delighted to have a family of Superb Fairy-wrens resident in our garden (photo above). We take great delight in seeing them hopping around, flitting from bush to bush or feeding out in the open. Today the family of five – there may be more – were investigating the puddles of rainwater on the swimming pool cover. Several of them even tried it out by having a quick bath. Who needs to supply bird baths? 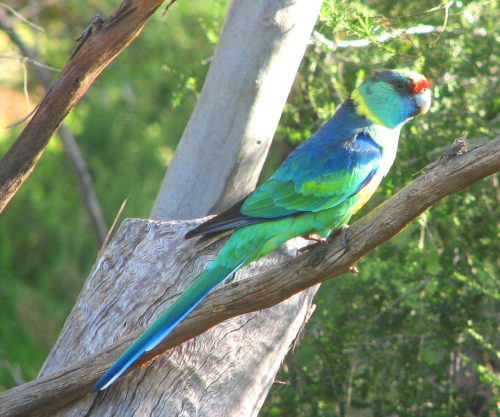 Every day we have plenty of parrots in our garden – either landing in the trees or flying overhead. We have a noisy group of Mallee Ringneck parrots (photo above) which we see and hear every day so I class them as a resident species. Today we also had several small groups of Rainbow Lorikeets fly overhead. In recent weeks they have been feeding on the flowering mallee trees, but today they just flew over screeching as they went. The local Galah population often lands in some of our trees but today they just flew over in loose flocks numbering from about six to forty. 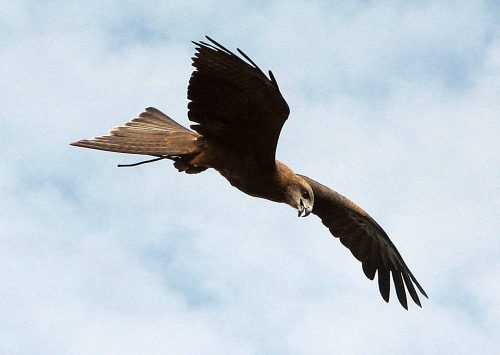 At one point I actually put down my food and walked quickly out from the veranda to get a better view of two birds gliding high overhead. At first, I thought they were Wedge-tailed Eagles, mainly because they were so high. On closer inspection using my binoculars, I could see that they were Black Kites (see photo above), common in this area but one species I hadn’t seen near our home for quite some time.

In all, I saw or heard 22 species during the half hour lunch break. This is not a huge number, but it was a satisfying break despite that.

I would love to hear about the birds in your garden – use the comments section.

Next: Lunch snatching Kookaburra » « Prev: That’s not what I expected