Next: That’s not what I expected » « Prev: Crested Pigeons like to sun themselves 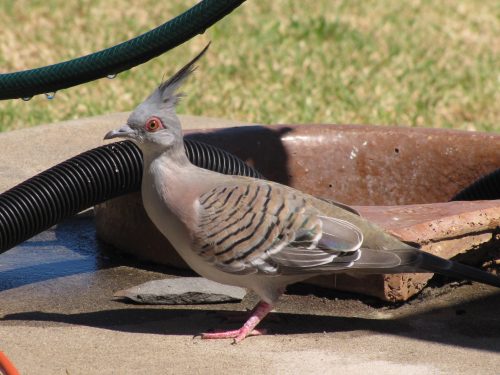 In my last two posts (here and here), I wrote about a small flock of Crested Pigeons which I photographed last month. This was on a short weekend stay in the Brighton Caravan Park in the southern parts of Adelaide in South Australia. This small group of pigeons came near to us while we were sitting outside our caravan having lunch on one of the days. They stayed long enough for me to quietly go into the caravan to get my camera and then back to my seat to take some photos.

All the time I was shooting them, they sat on the grass only a few metres away. Several of them were enjoying the dripping tap which was connected to the hose leading to our van. It was a warm day and the birds even sat in a small puddle of water on the concrete slab around the tap. For the rest of the time, they were either sitting on the grass sunning themselves, or pecking away at the grass all around our site.

I have found over the years of photographing birds that this species is often very easy to approach. They are generally not all that scared of humans nearby. In caravan parks, they are even easier to get close to than normally because they are used to large numbers of people all around, as well as plenty of car, bike and scooter movements. None of this seems to frighten them, making them easy to observe up close and also to photograph them. All very convenient to likes of me with my camera.

One of the disappointments of this set of photos (and those in the previous two posts), is that the iridescent colours on the wings do not really show up well. When the sunlight is coming in at the correct angle, the colours shine up brilliantly. What does show up in the photos today is the striping on the wings of the birds. At first glance, this species appears to be plain in colouring, but closer up there are subtle colourings and markings on their plumage. 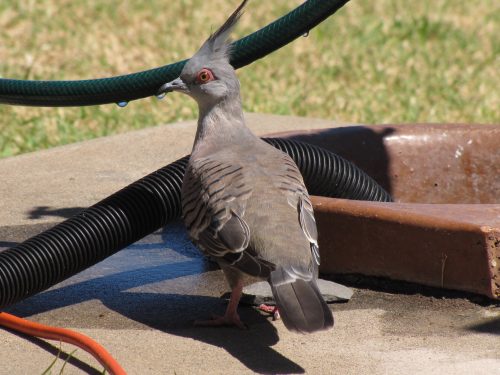 Tags: Brighton
Next: That’s not what I expected » « Prev: Crested Pigeons like to sun themselves