This posting sits a little uneasily. All postings are supposed to be about Australian birds. I am about to break my own rule and show some photos of an introduced species, the Rock Dove or Feral Pigeon. (It is also called a Domestic Pigeon or Homing Pigeon). 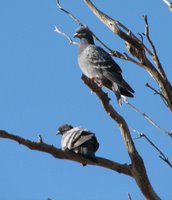 Above: Photo of Rock Doves perching on a dead
eucalyptus branch, near Murray Bridge, South Australia.
A few weeks ago I managed to get a good photo of two Rock Doves perched on the dead branches of a eucalyptus tree near our home. They allowed me to approach quite close before flying off. Many more were feeding on the ground in a nearby paddock.

In Australia, like so many places, they have become a pest species, especially in city parks and gardens. I have also seen large flocks numbering in the thousands along the coastal cliffs in parts of South Australia.

Rock Doves were introduced to Australia many years ago and have successfully spread throughout the more temperate regions of southern and eastern Australia. They have been particularly successful in our larger cities and towns. Very large flocks can also been seen near grain storage silos in rural areas.

Many cities around the world have a massive pigeon problem. The health risk posed by these birds must be enormous, not to mention the mess they make. On a recent visit to Kathmandu, Nepal, I had the misfortune to be the target of not one but two pigeons on the same day. This annoyance resulted in some extra washing in my hotel room that night. I was so pleased I was wearing a hat at the time. 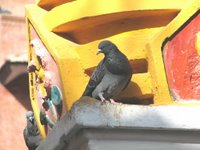 Above: A photo of a Rock Dove on a temple, Kathmandu, Nepal.
Several days later while visiting the city of Patan, Kathmandu, I saw a local lady selling food for tourists and locals to feed to the local population of pigeons. As the seed was spread by her customers, hundreds of pigeons descended from the nearby temples and other buildings in thick clouds of flapping feathers. They all assembled hurriedly in a little chained off area set aside for the purpose. This is not the way to discourage their booming populations. I didn’t stop to ask if feeding the pigeons had some religious significance; perhaps it did. 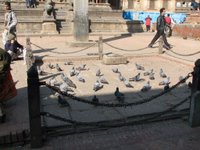 Above: a photo of pigeons in Patan, Nepal.


One Response to “Rock Doves”