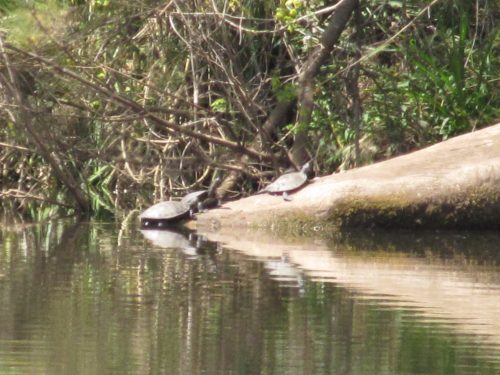 As I write this we are in Sydney visiting our son and his family. We enjoy visiting him because it is a precious time of blessing as we spend time with our two grandchildren, ages eight and five. It is always great to see them growing and developing. During our times here in Sydney we have limited opportunities to go birding, so any free time we have is really appreciated. On this particular trip, we have visited Lane Cove National Park on several occasions, both times for lunch. This national park is only about ten minutes away by car, depending on the volume of traffic and time of day.

On a recent visit, we set up our folding chairs in a shady spot with a good view of the river. We placed our picnic lunch on the side table of our chairs. Before we could take a bite I observed two Long-necked Turtles sunning themselves on a log protruding from the water (see photo above). I handed my binoculars to my wife so that she could have a closer look at them.

That was when we were robbed!

A cheeky Laughing Kookaburra swooped down from a nearby branch. It snatched a part of my wife’s sandwich and flew off with it. As it dropped the sandwich makings on the grass nearby, another kookaburra flew down to share in this ill-gotten booty. Not long after this, as they were squabbling over their prize, a Noisy Miner joined in the fun. Noisy Miners are one of our native honeyeater species; they can be quite aggressive towards smaller birds and they are obviously quite at home matching it with the much larger kookaburras. 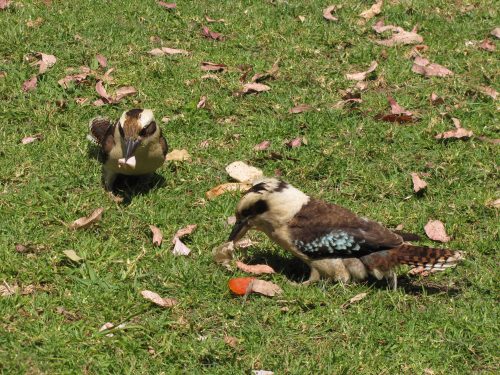 My wife was incensed. She had lost a portion of her lunch to a thieving bird. Later, she read a small plaque on one of the park picnic tables. In fact, all tables have copies of the same message: “Visitors are asked not to feed the birds and animals” or words to that effect. Perhaps the rangers should also put up signs instructing the local wildlife not to snatch human food.

Naturally, we guarded the rest of our lunch very carefully. No sense in losing any more of it. A few minutes later, two Brush-turkeys came mooching around. They looked as if they also wanted a handout. In fact, I held out my empty palm towards one of them and it approached to within a few centimetres of my hand. It left disappointed.

Please do not feed the birds

I think it would be prudent of me to make mention of the fact that it is strongly recommended that people in parks, gardens and even their own gardens refrain from feeding our native birds. Most human food – especially bread – is actually quite dangerous – even deadly – for our birds. By all means, provide fresh drinking water in a birdbath, but resist the desire to feed them. It’s for their welfare.

PS Go to below the comments section to subscribe to my monthly newsletter. These newsletters will contain extra news items and special insights and photos not available in my regular posts.

A long absence from birding

I have been absent from posting new photos and articles on this site for several months.

Sorry about that. Life got in the way.

Earlier this year my wife and I went to Sydney to look after our two very energetic grandchildren during the school holidays. That was fun but also very tiring. On our return, we had many visits to stay with our daughter in Clare in the mid-north of South Australia. Over the period of several months, we helped her to pack up all of her belongings. They are now in storage in a shipping container on our property.

She recently flew to Ethiopia to take up a two-year teaching position at an international school in Ethiopia. Although she hasn’t updated in in a while, you can follow her adventures on her site called Rose’s Travel Jottings.

During all this travelling, packing and cleaning I had very few opportunities to go birding. I had even less time to take photos and to write about the birds I was seeing. On top of all that I had computer problems (aaarrrgh) and then another trip to Sydney to care for the grandchildren. We love them dearly, so that is not a hardship, though opportunities to go birding and to do much writing are limited when we are with them.

Life is nearly back to normal, so you can expect more regular posts here in the coming months. I am also planning on publishing regular monthly newsletters with extra articles and information not appearing here on this blog. You can subscribe to this newsletter below.

PS My computer is now back and running okay.

You are currently browsing the Trevor's Birding blog archives for October, 2016.