Next: Where are all the Emus? » « Prev: Upset New Holland Honeyeaters 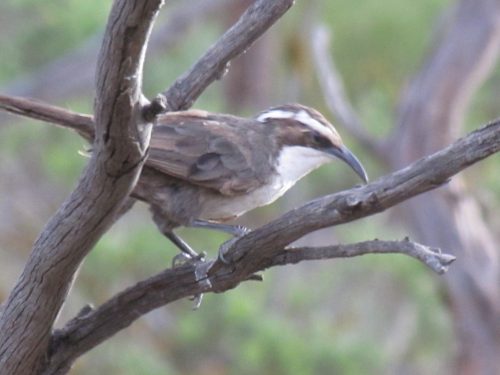 The White-browed Babbler is a common bird species around where I live in Murray Bridge, South Australia. They could almost be considered as a resident species in our garden and on our five-acre block of land, but we don’t see them every day. Frequently – but not every day. Their range must be larger than just our property.

A few days ago my wife and I had been out for the morning. I drove down the driveway and we stopped in the car for a few minutes to enjoy the warmth of the sunshine. It was a cold, blustery day with occasional showers. As we sat there chatting, we noticed a White-browed Babbler hopping along the driveway in front of the car. It had a few small twigs in its beak and was pecking at the ground, collecting more twigs. As it flew towards us, it looked like it had whiskers sticking out from its beak.

The bird flew immediately into the Grevillia bush next to the car. We immediately realised that it had been carrying nesting material. After a minute or so, we saw it fly out of the bush to another spot in the garden where it started collecting more twigs. While it was gone, I went to the bush and easily found the partly made nest. I did not linger long because the nesting building bird was on its way back to the nest.

Over the next few days, the Babblers in our garden busily kept working on the nest. I had another peek into the bush the day before we left on our four week trip to Sydney. The nest then looked complete, but I did not want to hang around too long to check whether any eggs had been deposited in the nest. If there are eggs in there, they will probably hatch out before we return home. We may be just in time to see the new hatchlings when we return.

Tags: White-browed Babblers
Next: Where are all the Emus? » « Prev: Upset New Holland Honeyeaters


One Response to “Babblers building a nest”