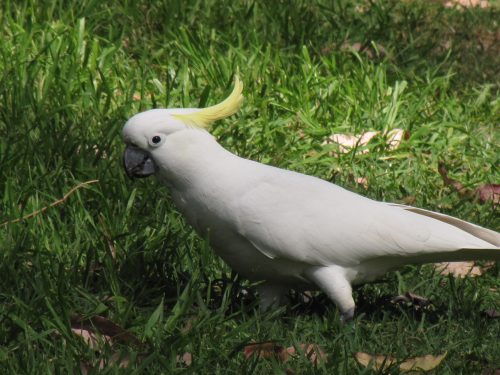 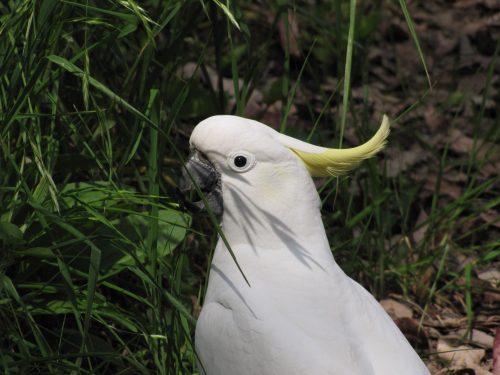 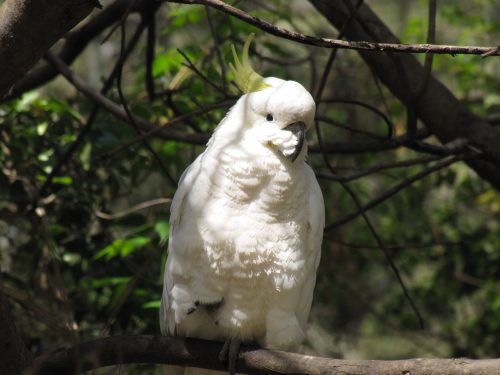 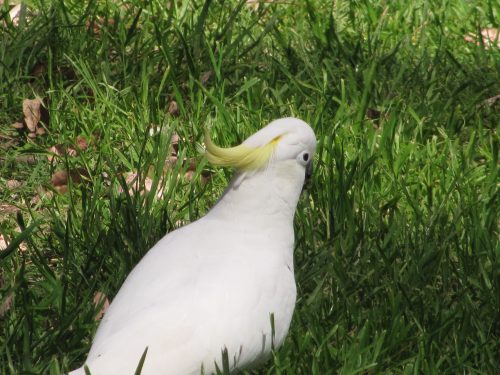 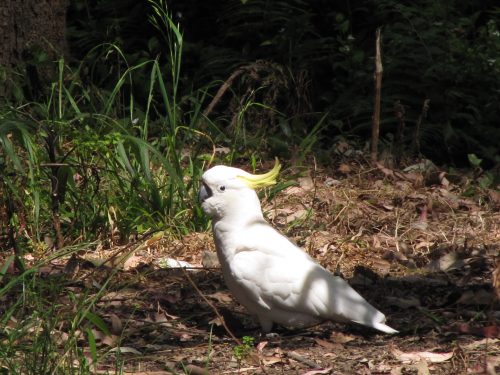 We have many different kinds of parrots visiting our garden and five acre block over the course of the year. Some are resident, like the Mallee Ringnecks, others are only occasional visitors. The Little Corella is one of those infrequent visitors and when they do visit, it’s usually just a “flying visit” – meaning – they just fly over without landing. This is despite the species being present in large flocks of 200 – 500 (or more) along the River Murray only 4 – 5 kilometres away (as the parrot flies).

This morning I was busy attending to something when my attention was drawn to an unusual call outside – unusual for our bird life, that is. I instantly recognised the call of a flock of Little Corellas. I raced outside, noting that there was no time to grab either binoculars or camera, just to see a flock of about 50 quickly disappearing over the trees in the distance.

Never mind; at least I now know that they still know where I live, and are prepared to pay me a visit every now and then, albeit oh so briefly.

The photos on this post were taken last year in the riverside reserve at the nearby town of Mannum.

On my recent visit to Tintinara in the upper SE of South Australia I took a drive around the streets. On every other visit to this town I had just driven through except once when we stopped for a toilet break. I occasionally do some deliveries for a local courier so I took this opportunity – after I’d delivered the urgent parcel for the veterinarian – to look around the town and see if I could spot any interesting birds, and perhaps get some good shots.

On the grassy verge of the main road near the oval I saw several Long-billed Corellas feeding on the grass. Several Galahs added to the number. I just pointed the camera out of the window and took the photos on this page. The photos are not very good as I shot them quite quickly. The corellas were a little flighty, and when I tried to get closer by getting out of the car, they flew away. I also saw a small flock feeding on the cones of a pine tree near the oval, but couldn’t get close enough to photograph them.

Long-billed Corellas are found throughout most of south-eastern South Australia, western Victoria and into the Riverina region of NSW. In some other areas there are feral flocks which established themselves via escapes from aviaries, or deliberate release.

I’ve personally not recorded this species here in Murray Bridge where we get large, noisy flocks of the very common Little Corella.

On the last day of our holidays in January we travelled from Gisborne just north of Melbourne to home in Murray Bridge. It was a long day of driving and I had few opportunities for birding along the way. we left our friends’ place a little later than I had hoped so we didn’t stop for morning tea. We pushed through to Ararat for lunch.

In Ararat we found a reasonable spot in the Alexandra Gardens. Here I was able to do a few minutes of birding during and after our picnic lunch. On the lake were the usual types of birds one expects in lakes in parks and gardens: Eurasian Coots, Dusky Moorhens, Pacific Black Ducks and Silver Gulls.

While we were eating a flock of about 40 Long-billed Corellas came noisily wheeling overhead and settled in the tree above us. In the distance I saw a smaller flock of Yellow-tailed Black Cockatoos winging their way slowly across town. A Laughing Kookaburra called somewhere near and Masked Lapwings could be heard calling on the adjacent sports grounds.

In the shrubbery near us several Common Blackbirds gave their warning call as I came down the path,  New Holland Honeyeaters were busy feeding in the well maintained Australian native plant section of the gardens and several Striated Pardalotes called from the canopy of the trees overhead.

A visit to Bendigo, Victoria

While staying with our friends in Gisborne north of Melbourne last January we went for a drive to Castlemaine and then on to Bendigo. The main purpose of the trip was not to do any birding but rather as a social outing. The ladies in our group wanted to see an exhibition in the gallery so my friend and I spent the time shopping. We didn’t buy anything, which can be the best kind of shopping.

Before leaving I asked my friend to drive to the Bendigo Botanic Gardens. I wanted to check out the small zoo there and to get a few photos. I’m sorry I did. This very small zoo can hardly be called a zoo. Two rather disgusting aviaries with only a handful of birds and a small enclosure with three wallabies does not exactly inspire one to visit. The gardens are also in a very poor state. I guess the local authorities have the excuse of the continuing drought and severe water restrictions.  I didn’t even bother making a list of birds living in the natural environment there as I was so upset. Visits here in the past have been so enjoyable in this beautiful city, but this time I felt very let down.