Corellas: Villains of the Bird World 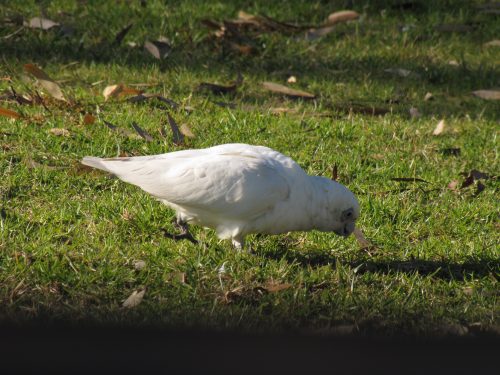 From time to time I take out a few minutes from my day to go birding. Sometimes these few minutes stretch into a few hours. I recently took off a whole afternoon. During this time, I visited six birding spots around my home town of Murray Bridge which is about an hour’s drive south-east from Adelaide.

One of the spots I visited was Sturt Reserve. This lovely spot is on the banks of the Murray River. It is named after Captain Charles Sturt who explored the river in 1830. The reserve has large areas of lawn for picnics, a large playground and a restaurant. It also plays host to a wide variety of birds.

On my recent visit, there were quite a few Little Corellas in the trees along the river. In flocks of 30 – 50 they can be annoyingly noisy. In recent years, these flocks have grown into the hundreds on many occasions. They are known to be high on the list of the Villains of the Bird World.

In large flocks like one can see at Sturt Reserve – and other spots around the district – they can wreak havoc on trees, stripping leaves, twigs and bark from trees until little is left but for a carpet of gum leaves on the ground below. The nearby lawn-tennis courts have also been a target of these destructive birds. They have sometimes left the courts unusable after the sharp beaks of several hundred birds have visited. Various methods to disperse the flocks have been tried, but without much success. This is a widespread problem in many places in South Australia.

Later, I drove a few kilometres to the southern edge of town to visit Swanport Reserve, also on the banks of the river. Here I witnessed flocks of several hundred corellas flying along the river and then out onto recently cultivated farmland across the river. Because of the distance, I was only able to estimate their numbers. After many smaller flocks had joined into one large flock, there must have been at least 1200 birds – possibly as many as 2000.

The photos below were taken at Sturt Reserve. They show the playfulness of some of the birds on the street lights. While I couldn’t see any damage to the lights from their beaks, they are quite capable of causing the local council some expensive headaches. 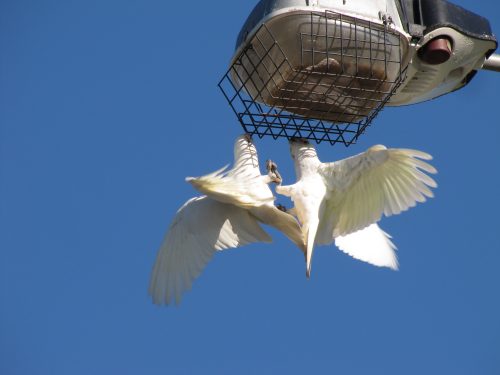 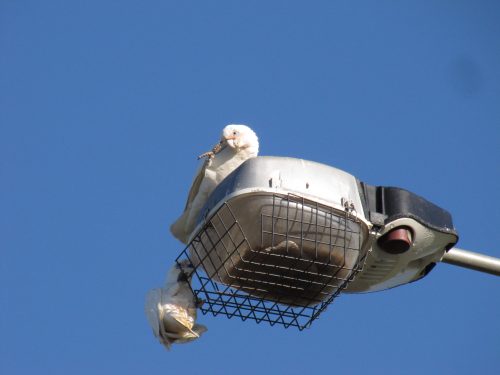 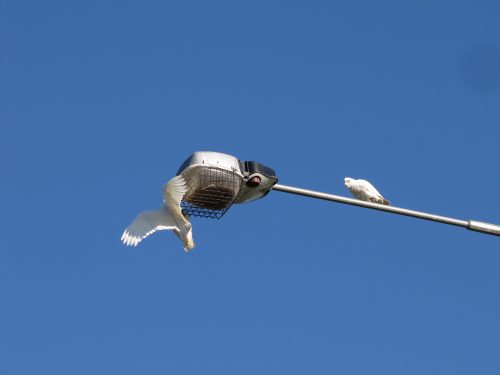 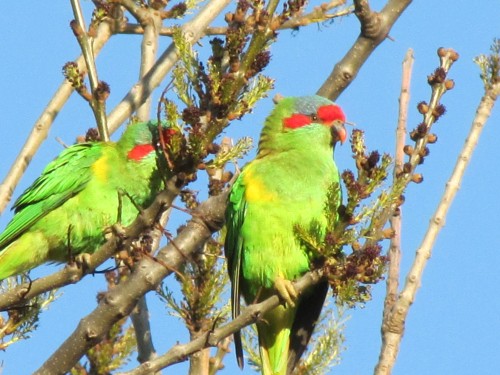 An influx of Lorikeets

Over recent days we have had an influx of lorikeets in our garden, on our property and along the road leading to our place here on the edge of Murray Bridge in South Australia.

Normally, we have the odd flyover of a small group of Purple-crowned Lorikeets. Occasionally they will land in one of our mallee trees for a short feed, depending on the extent of flowering at the time. They rarely stay for more than a few minutes.

From time to time we also have Rainbow Lorikeets shooting across the tops of the trees at speed. They are often gone in a flash, flying like colourful arrows against a blue sky. They, too, rarely come to settle in our trees.

The current influx of Musk Lorikeets is somewhat unusual. It is the first time in over 12 years that I have recorded it here in our garden. (My database records only go back that far; I am progressively working back through them.) Although it is relatively common in this area, I haven’t recorded it in our garden in all those years. In fact, if my memory is correct, I have recorded this species in our garden on only a handful of previous occasions, all of them more than 12 years ago. 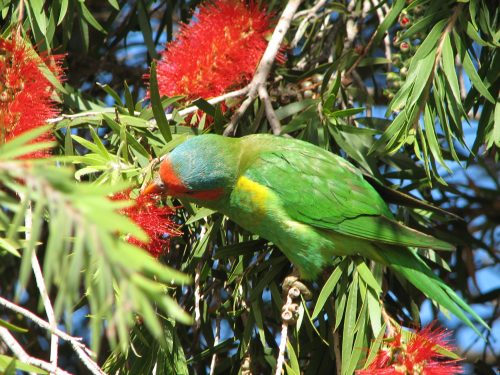 Why the influx of Musk Lorikeets?

This leads me to contemplate the question: “Why now?”

The reasons are clear and far from complex. The last six to eight months have been exceptional from a weather point of view. From late mid-winter last July (2016) we have had well above average rainfall. This extra rain has produced one of the best flowering seasons for many years over the recent summer months (December – February). The eucalyptus mallee trees have flowered prolifically, along with many other local species of shrubs and bushes. Being predominantly nectar eating birds, Musk Lorikeets have flocked to this area. I don’t mind; I love having them around.

While I was watching them feeding in a mallee tree near to our house earlier this week, something spooked them. They flew off over our orchard, wheeled around to the north, then east and like green coloured screeching darts came hurtling back to the tree near me and recommenced feeding. As they flew, I estimated that there were some 40 to 50 birds, far more than one usually sees in a flock here. Having said that, I have seen large flocks flying together while visiting my daughter in Clare in the mid-north of South Australia.

I have included below, several photos of some of the trees and bushes currently flowering in our garden. These are what the lorikeets have been feeding on. 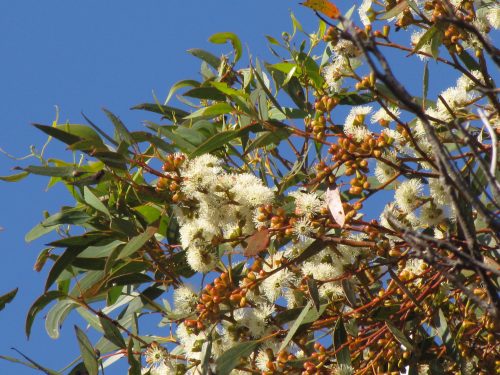 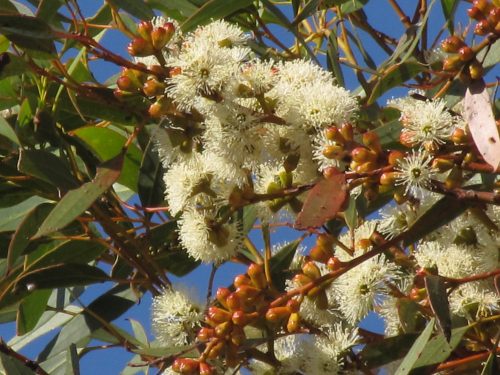 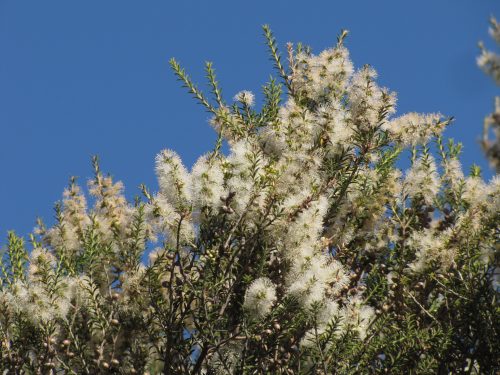 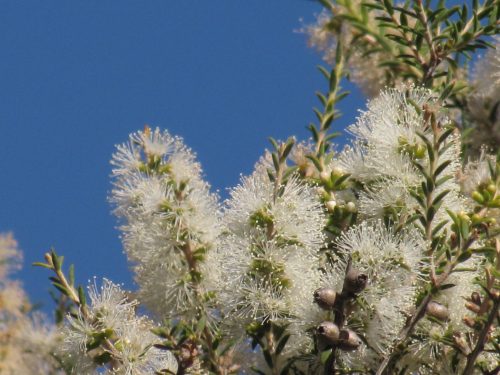 Superb Fairy-wrens in our garden Over the almost30 years we have lived in our present home we have rarely seen any wrens in our garden, part of a five acre block of fruit trees and mallee scrub with some native Australian plants thrown in for good measure. In most cases these occasional visitors were the locally common Variegated Fairy-wren. There are several thriving families up the hill in a mallee and native pine reserve about a kilometre away.

In other parts of Murray Bridge the Superb Fairy-wren is the common and dominant species. Just over a year ago we came back from an overseas holiday to be greeted with two Superb Fairy-wrens having quite happily taken up residence in our garden in our absence. It was a delightful welcome home present. In the coming months we saw them frequently, much to our continued delight.

Then they went quiet for a few weeks. Mmmm… had they moved on, we wondered?

To our increased delight they now number three: a coloured male and two uncoloured birds. Had they recruited another from nearby, or was the new one an offspring? We’ll never know. In recent days I’ve seen the three of them often, but sadly the male in in eclipse plumage and has lost most of his colour. In fact, he looks decidedly scruffy, not the magnificent colours shown in today’s photos. These shots were taken a few weeks ago. I also managed a good shot of one of the females (or uncoloured male?).

I should explain that all of these photos were taken in our gravel covered driveway. Our garden is far more attractive than it appears in these photos. The Crested Pigeon is a common species in our garden and on our 5 acre block of land in Murray Bridge, South Australia. We see them every day and they seem to be breeding throughout the year. I have found numerous nests over the time we have lived here. They are one of our many resident breeding species.

Individual birds like that shown in today’s photos frequently come to one of our bird baths to drink. Sometimes two or three will come together. During the hot weather of summer, when the temperatures can soar to 35C or above – as high as 46C – many birds come to the water throughout the day, some bathing, some drinking and many doing both.

I managed to get a series of about a dozen good close-up photos of one bird recently. It is times like this that I really appreciate having a 20x zoom facility on my camera.